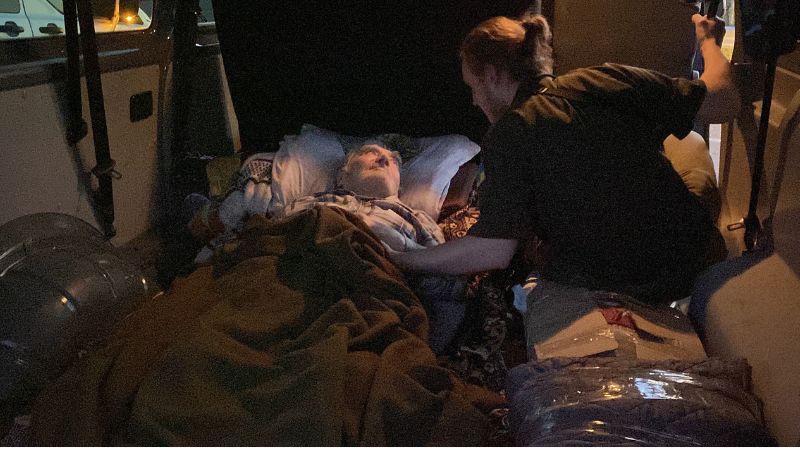 Couple weeks ago, we were on another trip to the warzone in Eastern Ukraine… We went to the cities of Kramatorsk, Slaviansk, Bakhmut and villages around Bakhmut again to deliver humanitarian aid, and also visit Ukrainian servicemen to encourage and pray with them.

On our way back, when we were picking people up for evacuation, we learned from an army chaplain we were serving in cooperation with about a 74-year Mykola, who, being paralyzed, was confined to bed. The elderly man lived in a tiny village near the frontline in Bakhmut almost everyone had left due to severe shelling by the Russian army, which was just 5 miles away.

The chaplain had addressed different people with a request to help him evacuate Mykola but always heard in response, “This man won’t live long anyway.” Other volunteers were afraid that Mykola would not endure such a difficult journey out of the warzone.

So, we took Mykola from Bakhmut to Poltava where his son lived. Of course, laying on a matrass in a seminary van with people who were speeding all 300 miles to make it to Poltava before the curfew could hardly be called comfortable.

However, that was a life-saving ride as the man urgently needed medical treatment he was not able to get at home anymore. Moreover, there was high probability that the Russians would occupy the area soon.

However, while on the road, one of UETS students, Oleh, who regularly joins us on our relief trips, was holding Mykola’s hand, supporting the man and encouraging him. At the end of the journey, when we met Mykola’s wife, she could not stop hugging Oleh, thanking him for what he had done.

This is just another testimony to the tremendous suffering of many Ukrainians, particularly those still in the frontline, which is almost 1000 miles long, and God’s relief through His children. Praise be to Him!

Below you can read a testimony of Artem Radionov, UETS graduate and youth pastor at the...

Incarnational mission, we taught about in our classrooms, must involve being in close...

The following are more testimonies about ministry of our students at the wartime:  ...